The Jaguar SS100 is considered to be one of the most aesthetically pleasing Jaguar cars with only 198 models being made.

The SS 100 model was not produced after the war, but a lone example had been stored, unregistered throughout the war. Known by its subsequent registration, LNW 100, the car was very successful in the Alpine and Tulip Rallies in the hands of Ian Appleyard. In September 1948 Jaguar annouced its first new post-war, stop-gap model. Something more radical was being conceived but various constraints dictated that the Mark V would carry the companay’s fortunes for a couple of years.

This hand cast sculpture is made of finest metal and is placed on a granite base and finished with a metal edge.

This sculpture was created in 2013 in a limited edition serie of 45 castings which is now for sale. 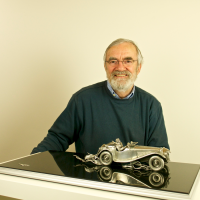 After the war Ian Appleyard, a Jaguar distributor in the northern town of Leeds who represented his country at skiing in the 1948 Olympic Games, took up rallying.

At first he used his own 1938 3 ½ -litre SS 100 on the Alpine Rally, but the car wore its tyres out at such a rate that he literally ran out of spares.

He then acquired a ‘new’ 3 ½ -litre SS 100, wich had been stored throughout the war at Lyons’ home, Wappenbury Hall. This car registered LNW 100, became particularly well known and recorded the model’s greatest successes when the SS 100 was no longer in production. Appleyard entered the new car in the 1948 event. It was in standard form apart from improvements to the steering.

Heavy rain meant slippery conditions and among the casualities was Donald Healey, in a car of his own make, who was saved from a 2000-foot drop by a well-positioned tree! Appleyard saved time en route by having his navigator refuel from cans while on the move, difficult enough on flat, straight roads, but more so on the tortuous Alpine passes! Snow was encountered on the Susten Pass and a herd of cows on another section. But still Appleyard remained on time and penalty-free. After rushing through a pathway cut through 30-foot snow drifts on the Iseran, the SS Jaguar collected a hen, which perched in front of the radiator for several kilometres before being dislodged on a particularly sharp bend! Thirty-five minuters were lost when Appleyard’s navigator, a doctor, had to minister to an injured competitor. A 64-mph average thus had to be maintained between the mountain town of Grasse an the coastal resort of Cannes. Appleyard and Potter, in an Allard, were equal at the finish and matters were decided by a short test consisting of accelerating, braking and reversing. The Jaguar driver beat his compatriot by 0.3 seconds and so colleted a coveted Coupe des Alpes for a penalty-free run.